You Never Know What Is Going to Happen Next! 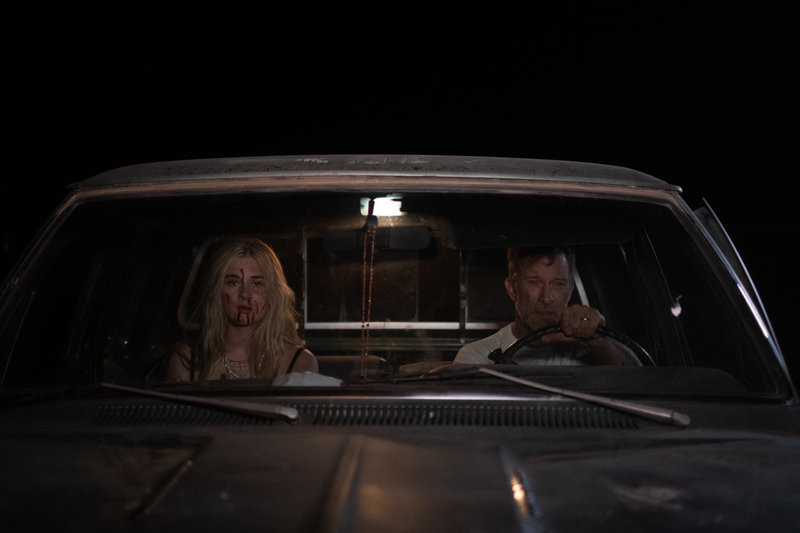 This film from Lionsgate & Saban Films (yep, the company that brought us Power Rangers) didn’t exactly sell me after seeing the poster; It almost looked like a western to some extent. The director classified the film as a “desert noir,” which, when I compare it to SICARIO, WIND RIVER, and HELL OR HIGH WATER, may be one of my favorite genres (ironic, isn’t it.) We all know westerns aren’t exactly my favorite genre. Thankfully that all went to the wayside once I started the film.

Actors Tom Jane (BOOGIE NIGHTS, DEEP BLUE SEA) and real-life daughter Harlow Jane play opposite Emile Hirsch (INTO THE WILD, THE GIRL NEXT DOOR) and Liana Liberato (IF I STAY, THE BEST OF ME) in a nonstop thriller that will catch you holding your breath throughout. Director K. Asher Levin knows precisely how to get the most out of a moment on screen. While I’m unfamiliar with any of his past works, I was instantly drawn to his next project, SLAYERS (coming out in October.) His unique directing style made the film feel very segmented but still one large project.

While I expected nothing but the best from Hirsch and Tom Jane, Harlow Jane (daughter of Tom Jane and Patricia Arquette) was the film's biggest surprise. She was an absolute presence every time she was on screen, which was a tall order considering the limitation she had as a character (I’m not going to spoil it, I suggest you don’t!) I’m pretty excited to see where she goes from here; hopefully, she gets the opportunity to show her range in more films.

Reading the director's statement from the press notes for this film was awe-inspiring; on top of everything that 2020 brought the world, he was also fighting a long list of personal battles. “To say the world was shit and the outlook was grim was an understatement.” “But I persevered, as did the country. We looked tragic fate in the eye and said, “f*** you, I got a different idea here.” That passion can be seen on screen as he directed this great cast in one of my surprise hits of the year.