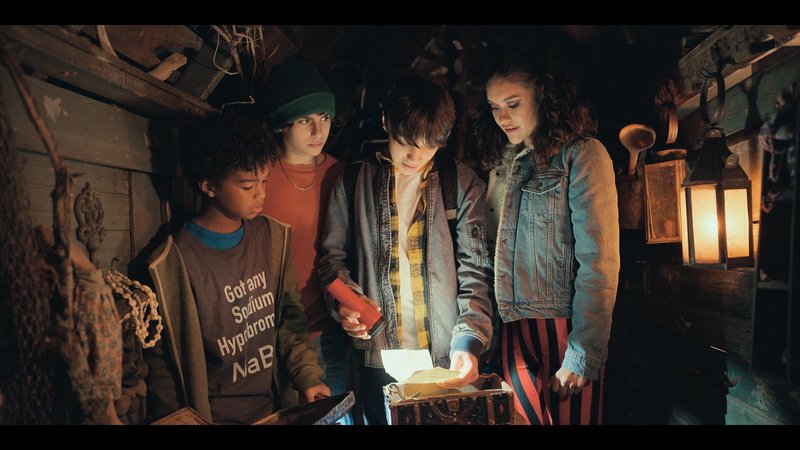 RAVING REVIEW: If you liked the late 80s and early 90s Disney Channel original movies, I’d bet you’ll appreciate this visual successor. It calls back to the kid-friendly horror vibe of so many classics.

I’ll never forget the first time I read that there was going to be a Spirit Halloween movie. If you live under a rock and aren’t familiar with Spirit, they are a yearly pop-up shop that regularly rents out vacant buildings of recently closed merchants (such as Toys “R” Us, Sears, Macy's, etc.) to the extent that even their website lists what the store once was. So you can imagine my shock and confusion when this was announced.

I was cautiously optimistic but also assumed the film would be a no-budget disaster. Although I soon learned that no other than Christopher Lloyd and Rachael Leigh Cook would be starring in the film. I was excited when I got an invitation to screen the film, so I quickly requested access.

As I mentioned above, this is a kid's movie; although it is PG-13 for good reason, there are some “scarier” moments that a young child may be frightened by. If you’ve ever been to a Spirit Halloween, think of everything around you regarding the fright level.

Most of the child actors in the film are what you’d expect for a PG-13 adventure. Possibly except for Marissa Reyes (RAVEN’S HOME,) who plays Kate and is arguably the film's lead. She pulls it all together in a cohesive and fun story, while still letting everyone have their moment to shine.

It looks like reviews are mixed, to say the least; I think many people likely went in hoping for a traditional horror film. This is why I think it’s essential to set your expectations correctly when going into a film like this. For what it is, I think it was a fun, family-friendly thrill for the beginning of the spooky season!