Another Fine Example of the New Modern Horror Genre

by Chris Jones
Published on December 5, 2022 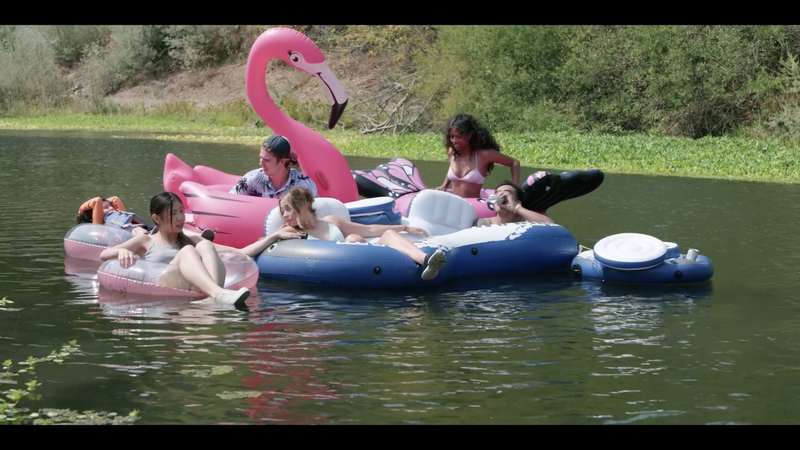 RAVING REVIEW: A modern take on a genre that has been around for some time. Breathing new life into a tired cut-and-paste style is hard, but with the right touch, we see the “vlogger” lifestyle intersect with the middle of woods mystery killer.

From writer/director Zac Locke (producer of 2019s BLACK CHRISTMAS and 2022s VENGEANCE), we get an intriguing experiment that felt familiar but also had some new blood. While watching the film, I felt so many things that I’d seen before, but every time I started to get comfortable with what I should expect, I got a curveball that threw me off.

A group of teens in the middle of the woods, the crazy guy telling them they shouldn’t be there, the unexplained murders (sounds like FRIDAY THE 13TH, right?) While I felt at home watching this, it ended up being more of an homage to these classics than a ripoff.

I would put this right up there with BODIES BODIES BODIES, and SISSY from this year; all three of these films take the “influencer” lifestyle and meld them into traditional horror. It’s not easy to pull off; if you’re not careful, it comes off as cheesy or condescending. I’m far from an “influencer,” although I share quite a bit on social media and have (in my mind) a decent following.

One of my biggest complaints with modern horror is “seeing the scary,” and this handles that perfectly. Something about the film gives you an uneasy sense of unknowing throughout. As another reviewer pointed out, it takes place primarily during the day (who does that!), yet it works wonderfully. As a whole, I love using my imagination to come to my conclusions; a good writer will leave you room to grow the film after walking away after the credits role. I would love to see this universe expanded, although I would put out a preemptive warning, let’s not follow the same formula. The tone would be great, but we don’t need a franchise that repeats itself in every film.